With the energy of a lightning bolt, bright colours riff alongside murky shadows and menacing figures summoned by Macdonald’s vital imagination. This work seduces with a playfulness which in turn pounces with claws bared.  Influenced by Wassily Kandinsky, Jean-Michel Basquiat and Jane Campion, Macdonald’s work pokes a finger deep inside a fairy-tale universe and pulls out a plum.  This exhibit includes a nod to Macdonald’s rich theatrical gifts – providing interruptions in traditional viewings – as the the gallery lights shut down at intervals to reveal glowing accents within the dark. 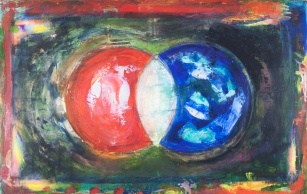 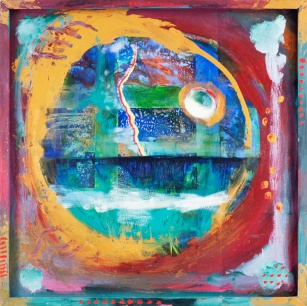 Through The Veil 24 x36″ acrylic on canvasSOLD

Limn: to draw or paint, as a picture, to decorate in colours, (to illuminate, as books or parchment, with ornamental letters, borders).
Limn is such an unusual little word, and yet on reading the definition I realized that I have always limned.
Since childhood I have drawn and painted and sought formal training as a young adult at Central Technical school in Toronto which provided an introduction to many different mediums. The daily practice of drawing and painting from a life model however, became the foundation of my artistic strengths, from which I still drawn on today.

It is around 4pm when the afternoon light hits the prism hanging in my south-facing window. Suddenly tiny little rainbows are dancing all around the room, so darned joyful,
they bring the room to life.
(I’ve often thought how good to install prisms in hospital rooms or long-term care facilities.)
Just as quickly as they arrive, they are gone again.

It is these unexpected ephemeral moments of joy that lead me on the quest to strike the canvas and make the paint jump for joy. This exhibit Limn includes paintings that I have done over the last decade or so, along with brand-spanking new works. Many of these pieces mark a time in my life- important journeys, points of inquiry. Sometimes painful.

The joy and light becomes available only in contrast to the darkness. And so I must seek it too.

When I begin a series it is usually a new colour combination that gets the ball rolling, then I look to reality, study objects, human figures, to find inspiration and to determine the sources of light. Once the process is underway, I allow my imagination to reign unbridled. It is in this space- this bleeding line between reality and imagination – where I discover unexpected imagery in my paintings. Where did these images come from? Why are they there? The presence is strong, has it’s own logic and demands that I follow it’s lead. I fight against it sometimes, but in truth, I remain “under the spell” of light.

Some important sources of inspiration and admiration, have been found in the art works of Wassily Kandinsky, Jean Michel Basquiat, Maura Kalman, and the films of Jane Campion.

Many thanks to Laurel Paluck for curating the show Limn.
Thanks to Cath Adele and Jess Rowland for surfaces to paint on.

Thanks to Connie van Rijn, Rowena Dykins, Lynda Hall and Jacqueline Rogers as outside eyes and ears and for their wisdom.